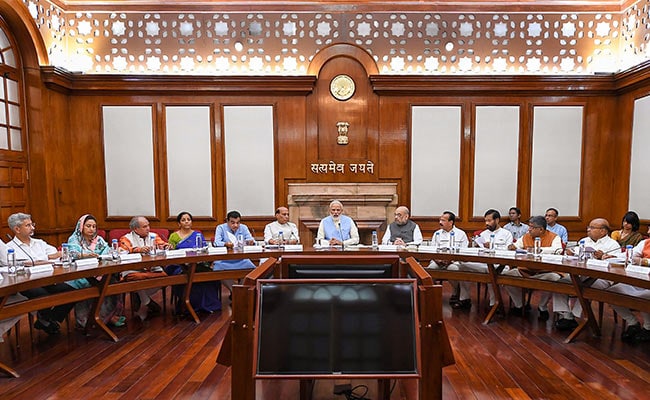 The Union cabinet will meet at the official residence of Prime Minister Narendra Modi in New Delhi today amid rising tensions in Jammu and Kashmir. One of the most important panels, the Cabinet Committee on Security, includes the Prime Minister, Rajnath Singh, Amit Shah, Nirmala Sitharaman and S Jaishankar, will also meet today.

The matter first came to light when Omar Abdullah hinted at such a development on social media. “I believe I’m being placed under house arrest from midnight tonight and the process has already started for other mainstream leaders. No way of knowing if this is true but if it is then I’ll see all of you on the other side of whatever is in store. Allah save us,” he tweeted.

Many political leaders, including Congress leader Shashi Tharoor and Communist Party of India-Marxist chief Sitaram Yechury, came out in his support.

Earlier on Sunday, the National Conference leader had expressed fears that the centre’s action of halting the Amarnath Yatra and recalling tourists from the state was a sign of bigger things to come. Referring to his meeting with Jammu and Kashmir Governor Satya Pal Malik the previous day, he asked: “Wouldn’t I be worried if the governor of the state says that nothing is happening today, but he doesn’t know about tomorrow? If he’s confused about what to expect, how can you expect anyone of us to know what’s in the offing? Other than being told that there’s some vague (terror) threat, nothing concrete is being shared with the country.”

He had also said that his colleagues in parliament may move an adjournment motion on Monday to seek reasons for the government’s action in Jammu and Kashmir.

Omar Abdullah’s remarks came after all major political parties in the state met at the residence of Farooq Abdullah, National Conference chief and his father, to discuss the centre’s actions in the Valley and fears that they may be part of a larger effort to repeal the state’s special status.

Farooq Abdullah, reading out a resolution adopted at the meeting, said the parties will send delegations to meet President Ram Nath Kovind as well as Prime Minister Narendra Modi to apprise them about the “consequences” of any attempt to tinker with Article 370 and Article 35A of the Constitution, or carry out delimitation of constituencies or trifurcation of the state.